Home / World / Dozens of forest fires are raging in Greece 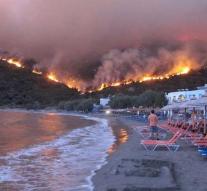 athens - The Greek fire brigade has handful of work on forest fires that rage in some regions of the country. The fire department reported Saturday that only fifty fires had broken out between Friday and Saturday morning.

Since Saturday, a big fire has been raging in Ilio, a suburb of Athens. The Peloponnese peninsula is also severely affected. On the island of Kythira, south of the Peloponnese, the fire brigade attempts to control a large forest fire since Friday.

The authorities fear that the situation will deteriorate in the coming days, as meteorologists expect the temperatures to rise further. In many places that Saturday went up to 35 degrees.