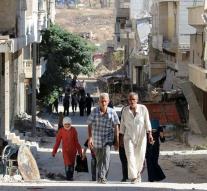 - Dozens of families have fled through a special corridor from besieged parts of eastern Syrian city of Aleppo. That the BBC reported Saturday according to Syrian state media.

The civilians were brought in buses to temporary shelters. Also some rebels would have surrendered.

Russia and Syria announced earlier this week will set up three corridors in order to give citizens the opportunity to flee the besieged city. It would also set up a corridor for rebels who want to surrender.