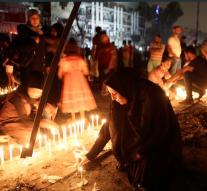 baghdad - A camp for dissidents near Baghdad International Airport was bombed Monday night (local time). Forty people were injured and the camp was largely destroyed, said a spokesman of the Iranian opposition movement People's Mujahideen Organization of Iran (PMOI).

Eyewitnesses were told twenty to thirty explosions. It is not clear whether the airport is also bombed. The spokesman announced that the Iraqi resistance movement forces cooperating with the Iranian government suspects.

Earlier on Monday, Baghdad was rocked by one of the bloodiest attacks in more than a decade of war and insurgency in Iraq. Prime Minister Haider al-Abadi announced three days of national mourning and ordered new security measures. He wore checking the Interior Ministry vehicles stringent.