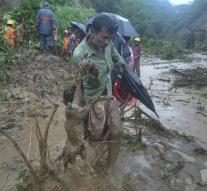 dhaka - At least 43 people have been killed in Bangladesh by landslides. According to local authorities, heavy rainfall caused large mudflows, causing homes to be buried and tens of thousands of people missing. 'The death penalty is probably still going on,' said a police spokesman.

The landslides took place in three hilly districts in the southeast of the country. The densely populated Bangladesh has more frequent storms, floods and landslides during the rainy season.

Rescue workers are looking for survivors together with the army, but have the greatest effort to reach the remote areas.