Home / World / Dozens of deaths by terror of Iraq 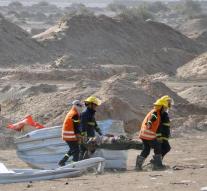 baghdad - Fifty people were killed on Thursday by attacks of terrorists at Nassiriya in southern Iraq. The attacks were aimed at a police station and two restaurants along a highway.

The attackers were dressed in uniforms of the Iraqi security service and moved into stolen military vehicles. The attacks were claimed by Islamic State.

The bloodiest attack was at one of the restaurants. A suicide bomber bombed himself among the restaurant guests in the southwest of Nassiriya. Three or four others then attacked the visitors and threw grenades. Among the dead are ten Iranian pilgrims.

There was no information about the attack on the police station. An unknown number of police officers died.

There were certainly eighty injured. According to the police, several injured have been discharged in critical condition, and death rates may increase.