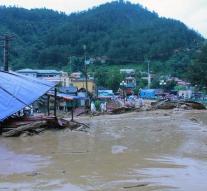 hanoi - Floods in Vietnam have certainly killed 26 people in recent days. It is expected that the death rate will increase, at least fifteen people are still missing.

The Vietnamese authorities reported Monday that the heavy rain, which has taken place since Thursday, has been destroyed by several roads and bridges. The material damage caused by natural violence is estimated at around 40 million euros. Precipitation is also expected for coming days.