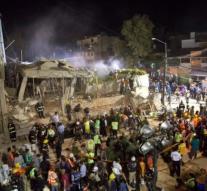 mexico - The collapse of the Enrique Rebsamen School in Mexico City has cost 21 children. Four adults also did not survive the drama, say the authorities. At least eleven people have been saved.

The school succumbed to the earthquake on Tuesday. The rescue activities also continued during the night hours. Hundreds of rescuers and people living in the debris, sometimes with their hands. Volunteers with megaphones shouted the names of rescued children to relatives.

'They just keep children from the rubble, but we do not know anything about my daughter,' said a 32-year-old woman who was waiting for news about her seven-year-old child.

The rescue operation at the building received a lot of attention in Mexico. There is still uncertainty about the total number of victims. Rescuers spoke earlier of 37 deaths, but the minister of education later held at least 25.