Home / World / Dozens of deaths by attacks in Pakistan 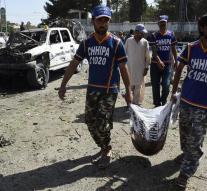 islamabad - Certainly 28 people were killed in the south and northwest of Pakistan by bomb attacks. At least 66 people were injured.

The first attack took place in Quetta on Friday. There a motorist blows his car at a checkpoint. According to local authorities, there were up to 95 kilos of explosives in the vehicle. Certainly thirteen people did not survive the explosion, including seven agents.

Later, two explosions followed a market in Parachinar, near the border with Afghanistan. There were at least 15 deaths, an official said. It was busy in the market because many people bought for the iftar, the first meal after sunset for Muslims who observe the Ramadan.

Terrorist organization Jamaat-ul-Ahrar says to be responsible for the attack in Quetta. It is still unclear who is behind the massacre in Parachinar.