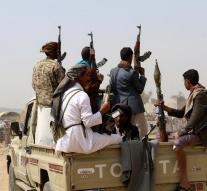 dubai - Certainly thirty people were killed by an air attack north of the Yemeni capital Sanaa. According to Houthi insurgents, a hotel was hit. News Channel Al Jazeera reports dozens of dead and injured in the Arhab district.

A spokesman for the international coalition led by Saudi Arabia, who was fighting with the Houthi rebels together with the internationally recognized Yemeni government, was not accessible. Sanaa and the north of Yemen are in the hands of the insurgents.