Home / World / 'Dozens of dead in battle against IS' 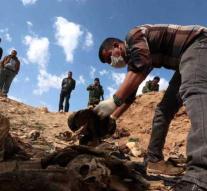 beirut - Heavy fighting between Islamic State and US-backed troops has led to dozens of deaths in recent days. That reports the Syrian Observatory for Human Rights.

With the help of US air support, the Syrian Democratic Forces (SDF) are trying to get hold of the latest enclaves of IS near the border with Iraq. The SDF took up positions on the eastern bank of the Euphrates River which they had lost to IS in recent days. Victims fell on both sides. According to the conservatory, 31 civilians, 50 IS fighters and 79 SDF fighters lost their lives during the past two days.