Home / World / Dozens of buses can not leave Aleppo 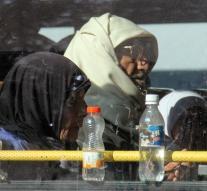 aleppo - A convoy of sixty buses standing in the freezing cold silence in the former rebel enclave of Aleppo in Syria. The Syrian Observatory for Human Rights reported Wednesday that people are in a number of buses there waiting since Tuesday they may leave Aleppo.

According rebels in Aleppo prevents the government of Bashar al-Assad that the buses can leave. The Syrian state blames the insurgents. They would have come up with new conditions for the agreement on the evacuation that the rebels and Damascus have reached. According to the Red Cross have so far 25 000 people evacuated from Aleppo.

The eastern part of Aleppo was four years in the hands of rebels. With the support of, inter alia, Russia and Iran, the military has Assad almost entirely reconquered this area on the insurgents.