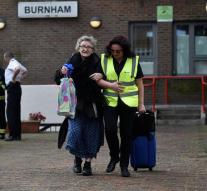 london - The cladding of dozens of flats in Britain does not comply with fire safety requirements, as evidenced by inspections. According to the British Government, 27 buildings are located in London, Manchester and Plymouth.

Local authorities in the British capital released all five flats on Friday night because of fire hazards. Thousands of people had to leave their homes. The fire department warned that it was unsafe to stay.

According to British media, British Minister Sajid Javid (Local Authorities) said that the fire safety issues in the evacuated flats are not just about the facade cladding. There would also be a lot of other issues, such as the lack of fire doors.