Home / World / Dozens of baby cobras without a trace in China 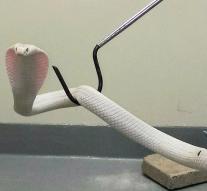 - Authorities in eastern China have been looking for some fifty small cobras escaped from an illegal nursery. In total the end of August some two hundred juveniles of the highly venomous Naja kaouthia, which have a characteristic mask on their neck that looks like a monocle, took off.

Since the mass escape in Jiangsu Province about 150 cobras been captured or slain, writes state news agency Xinhua. The tubes are about 20 centimeters long. Their poison is not as toxic as that of their adult counterparts.

The issue this week only came to light after a man was found slain and one of the snakes in his home. The local authorities have embarked antidote in case someone is bitten.