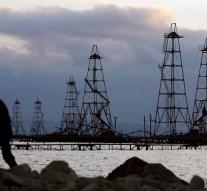 baku - When a fire on an oil platform in the Caspian Sea have been 32 deaths. 42 workers were saved. That is a trade union in Azerbaijan reported Saturday. The platform is located in Azerbaijani territorial waters.

There were still trapped dozens of people on the oil rig, reported an anonymous employee who went to the rig. The state oil company Socar declined to comment.

The fire started Friday when a gas pipeline was damaged by high winds. The storm also hindered rescue efforts. The fire has now been extinguished.