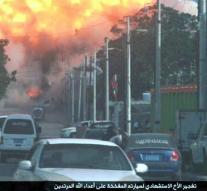 aden - In a suicide attack in the Yemeni port city of Aden approximately fifty people have been slain Monday and sixty injured. The target of the perpetrators was a recruitment center of the army. The Yemeni branch of Islamic State has claimed responsibility for the massacre.

Southern Yemen, among other plagued by jihadists. Who committed in May two bloody attacks in Aden. In Yemen, moreover, there is civil war. There is fighting two years ago between government troops and rebels in the north of the country to be named after the tribe of the Houthis.

The Houthis have made significant gains and controlling include the capital Sanaa. Aden is located 300 kilometers south of Sanaa and is owned by loyalist troops.