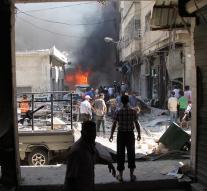 - "Air strikes on the Syrian city of Idlib on Saturday at least 25 people killed, including women and children. Dozens of people were injured, said rescue workers and residents of the city."

"The bombs hit a market in the northwestern city. There are still bodies under the rubble removed and the risk is quite substantial that the death toll continues to rise."