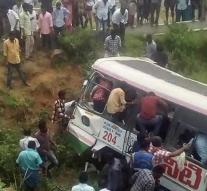 new delhi - Dozens of people have been killed by a bus accident in India. The vehicle hit the road in the state of Telangana. The driver reportedly lost control of the wheel when he was on a busy road for another bus, reports the newspaper Hindustan Times.

After the accident local residents came to the rescue. They later received reinforcements from the emergency services. The police report that at least 40 bodies have been recovered so far. The death toll can still rise, because many victims are in bad shape.

The Times of India newspaper reports that the bus carried more than sixty pilgrims. They were on their way to a temple in the area.