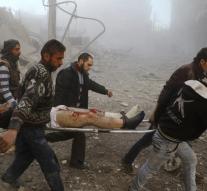 - At least 22 people have been slain by three bomb attacks on vehicles in a city controlled by Kurds in northeastern Syria. This was reported by the Syrian Observatory for Human Rights Friday.

According to this human rights organization, the death toll from the attack Thursday in Tel Tamer is likely to increase. The city in the northeastern province Hasaska is controlled by the Kurdish YPG militia, waging war with terror group Islamic State.

One of the bombs exploded near a health center and another at a vegetable market.