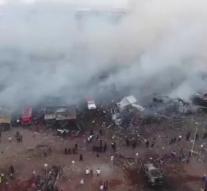 tultepec - In Mexico Tultepec are at least 60 people were injured after a huge explosion at a fireworks market. In the remote area to see large plumes of smoke, say witnesses. Reported BNO News.

The explosion happened around 14. 50 pm local time. Several emergency services were on the spot. It is not clear whether people were killed.