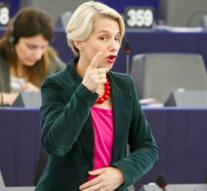 strasbourg - The Flemish politician Helga Stevens wants to be President of the European Parliament. The Group of European Conservatives and Reformists (ECR), the deaf Stevens Tuesday gekandideerd. The election takes place in January.

Current president Martin Schulz was elected in 2014 for a second term of 2.5 years. The German Social Democrat would be retained for a period, causing disagreement arose between the two largest political groups in the parliament, the Social Democrats and the Christian Democrats. The third group, the ECR, therefore, intend to create a chance.

The 48-year-old Stevens, a member of the Belgian nationalist party N-VA, is honored by the nomination. ' I am running because I am convinced that the directly elected Parliament should be much more transparent and should represent the EU. The past few years I have seen all the important decisions were made in back rooms by a small group of men from a few countries. ''