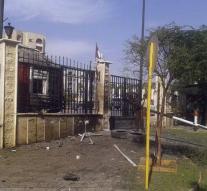 hama - The Syrian city of Hama on Monday hit by a double suicide bombing. Syrian state media reported that there were deaths, but exact numbers were not mentioned.

The first bomber blew himself up in the district of al-Hader. The second suicide bomber followed fifteen minutes later, in the same place.