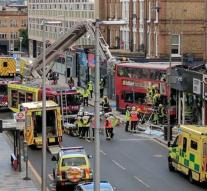 london - A full bus was bought in the center of London this morning.

Several people were injured. The double decker barked for 7 hours in a branch of the Poggen Pohl kitchen in Lavender Hill.

Two passengers on the upper deck became stressed. The driver of the bus had to be freed by the fire department and was taken to the hospital.