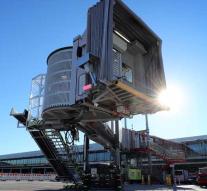 washington - A walkway to a plane at Washington International Airport collapsed Saturday night (local time). There were seven wounded.

At the time of the accident, medical personnel were just trying to assist an unwell traveler on the walkway. According to Southwest Airlines, which wanted to get passengers out of a Dominican aircraft, the injuries of the traveler and four workers are not life-threatening. Two Southwest employees were also injured.