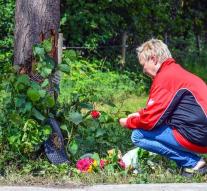 arnhem - The man who caused a fatal accident Friday morning in Zelhem (Gelderland), longer stays in custody. The investigating judge in Arnhem decided during his arraignment.

The man caused a head-on collision. A boy of four died on the spot from his injuries. His mother forty wounded, the 38-year-old father and a daughter three were seriously injured.

The suspect, a 38-year-old man from Doetinchem, the car had he controlled stolen from an employee prosecutor who was with him. The man was eight days before the accident made precisely on terms at large. He was nearly six months in custody for another case from 2015 in which he is accused of include assault, driving into a police car, threatening and driving.


The man is held longer because he is under more suspicion of manslaughter. The risk of recurrence is a reason to keep him in custody.

The court in Zutphen showed Saturday that the suspect had been released earlier because he had a criminal record. Also, psychiatric symptoms, which were known, seemed manageable.

It went downhill, however, after his release and probation advised to let him record. Even before the necessary legal steps could be finalized before, the fatal accident occurred.