Home / World / 'Donald can not lead a supermarket yet ' 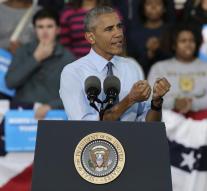 - Donald Trump is not fit to work in a supermarket, let alone to be president of the United States. That President Barack Obama said Tuesday in a campaign speech for Hillary Clinton.

With visible pleasure Obama listed the reasons why Trump is totally inappropriate in his eyes for the post: the fact that he as a businessman lost nearly a billion dollars, refusing his tax information to disclose and his comments about women. ' This guy say things you would not find acceptable of someone applying to a supermarket, '' The Washington Post quoted Obama.