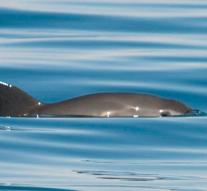 mexico - The Mexican government will use three trained dolphins to trace their endangered species, the vaquitadolfine. The help of the dolphins must ensure that the seriously endangered vaquita population is saved.

At the moment there are fewer than forty copies in the wild. The vaquita or Californian porpoise, a small nose dolphin, is threatened with extinction due to fishing with gill nets on shrimps in the Gulf of California. The porpoise species will get stuck in the nets and die.

The trained dolphins are deployed in September and once a vaquita is located, they are captured and transferred to a special residence. Mexico is hoping to rebuild the population of the small dolphin species. According to the government, this program is the last hope for the vaquita not to die out.