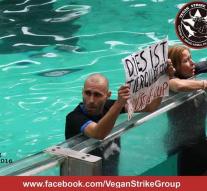 - Animal Activists from the Netherlands and Spain have disrupted a dolphin show in Duisburg. Five protesters were arrested, local newspaper Rheinische Post reported. They are trespassing accused.

Members of the group, which calls itself on Facebook Vegan Strike Group, jumps Sunday afternoon during the show in the pool with the dolphins. The three women and two men in the crowd wanted to be as attentive to the suffering that the animals would be done at the Duisburg Zoo. According to the zoo directors have the animals well and it is precisely the activists who put them at risk.