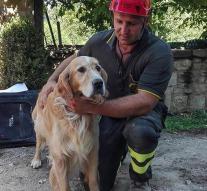 rome - Ten days after the earthquake in the Italian town of Amatrice, the rescuers brought a dog alive from the rubble. The Golden Retriever Romeo was found in the ruins of a house in the hard-hit section of the city, reported Italian media Saturday. The dog's owners had sought refuge after the earthquake of August 24, but their dog was missing since then every trace.

When the owners ten days later went back to their house to get out of the rubble personal belongings, enclosed dog gave a sign of life. According to reports goes well with the animal, which was under the rubble in a small cave.

The earthquake killed 290 people. Most of the victims came from Amatrice.