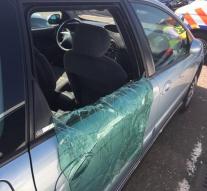 finland - The Marechaussee at Eindhoven Airport released a dog from a sophisticated car on Tuesday afternoon. The dog was sitting in a closed car for hours. The owner soon got out and he was heard. The man gets a trial.

A traffic controller noticed the sweepy animal and sees surveillance Marechaussees. On this they took the window and released the dog. The animal ambulance came on the spot to take care of the animal.