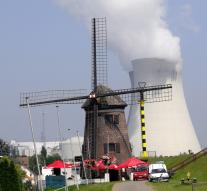 brussels - The Belgian reactor Doel 1 is Wednesday again 'turned on' and connected to the grid. This has confirmed the utility company Electrabel.

The reactors Doel 1 and Doel 2, which lie approximately 2 kilometers from the Dutch border, date back to 1975. They were shut after forty years, but the Belgian Government has decided to maintain in operation until 2025. Goal 2 was starting up again on December 24th.