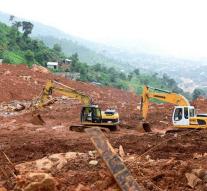 freetown - The number of deaths due to the mudflows in Sierra Leone has risen to five hundred. According to the Red Cross, six hundred people are missing. Heavy rainfall caused a landslide at the capital Freetown.

The Netherlands extracts 580,000 euros for the mudflower victims. With that money, the Red Cross can reunite relatives who lost each other, restore water pipes and provide other assistance. The caregivers also try to prevent cholera from breaking out.