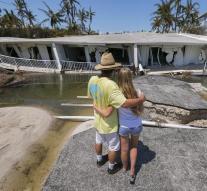 islamorada - The death toll caused by Hurricane Irma is further increased. The total is now 56.

Authorities in the United States report thirteen deadly victims in the three states of Florida, Georgia and South Carolina. In the Caribbean, 43 were killed, including four in St. Maarten.

On the Florida Keys, the damage occurred after passing Irma on Tuesday. Of all houses, 25 percent have been destroyed and 65 percent suffered serious damage, the Federal Anti-Fraud Office (FEMA) announced.

At the end of the day, Florida and the surrounding states had 5.8 million households without power. According to the Florida Power \u0026 amp; Light Co, the largest energy provider in the state, can still take up to September 22 until some western parts have power again.