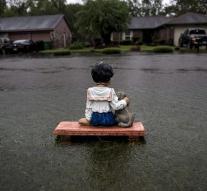 houston - The death toll due to the extreme weather in Texas has risen to 'at least thirty'.

Among the dead are a policeman and probably four volunteers in Houston who have not been seen since Monday afternoon. That reports various American media Wednesday.

The tropical storm Harvey has now penetrated into the neighboring state of Louisiana. Everywhere in the watery coastal area of ​​this state, measures have been taken against the abundant rainfall. The center of gravity of the vast precipitation area is currently located in the border area of ​​Texas and Louisiana.