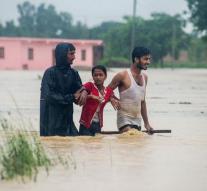 Thousands of people lost their house. Many places are closed from the outside world and bridges and dams in the country are damaged, according to the Nepalese Interior Minister.

8000 agents and soldiers were sent to the affected area on Sunday to support rescue operations. The area is regularly plagued by severe natural violence. Two years ago, about 9000 people died after a powerful earthquake.

Also in other places in Asia it was bad weather. Thunderstorms raided China this weekend, so hundreds of flights had to be canceled at Beijing's busy international airport.