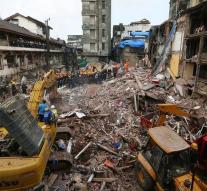 mumbai - The collapse of the collapsed flat in the Indian city of Mumbai has risen to 33. Rescuers are still searching for survivors in the ruins of the 117-year-old building on Friday.

There are no reliable estimates of the number of missing persons. It's the second collapse of a big building in Mumbai in a month's time. The city is also suffering from flooding due to heavy monsoon rainfall.

A total of 46 people were taken from the debris since the building collapsed on Thursday, of which 33 of them did not survive the drama.

The cause of the collapse is not yet clear. Many residents continued to live in the flat, although the authorities declared the building in 2011 unsafe.