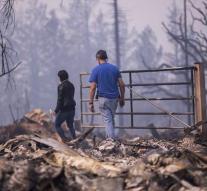 santa rosa - The death toll of the forest fires in California has risen to fifteen. Thousands of people are unsuccessful on Tuesday, the city of Santa Rosa has been hit hard and the assistance goes awry because there are no vans.

The smoke clouds pull up above Santa Rosa, leaving behind astonishing images: entire residential areas have been laid in the ashes. The fire is considered to be 'the hardest in California', and has destroyed at least 2,000 homes.

In total, fourteen fires have been in the state in various places. At first, the fire raged mainly in wine regions, but later the fire reached a big city like Santa Rosa.