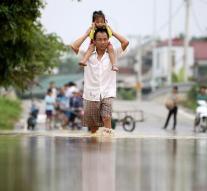 hanoi - At least 54 people died of emergency weather and floods in the north and mid Vietnam. Another 39 people are missing according to the disaster control service.

The floods in Vietnam this week are the worst in years, the minister of agriculture said on the Vietnamese state television.

Nineteen people from four families were obsessed this week due to a landslide in Hoa Binh. Only nine bodies of victims have been arrested, let the service know.