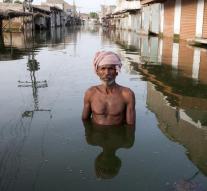 bhubaneswar/dhaka - Deaths due to floods due to severe monsoon rains in India, Bangladesh and Nepal have risen to over 1200 in recent days. The authorities in these countries said on Friday. According to the Red Cross, almost 41 million people were affected by the monsoon season, which is extremely severe this year. The relief organization fears that the situation is deteriorating even further, as the rain showers continue.

Earlier this week the Red Cross was still out of a number of 24 million people who were affected by natural violence. Thousands of homes, schools and hospitals would have been destroyed. International aid organizations report that thousands of villages have been sealed from the outside world, and residents have been detrimental to food and clean water for days. There is an urgent need for life-saving assistance.

Government representatives in the Indian eastern state of Bihar report that at least 379 people have died in recent days. Thousands of displaced persons are housed in shelters. In the neighboring state of Uttar Pradesh, 88 people died when floods hit nearly half of the extended state with 220 million inhabitants.

Also in Nepal many tens of thousands of homes have been destroyed. According to the United Nations, the floods in this mowing season are the worst in decades. More than a third of low-lying Bangladesh has been flooded. Crops and many acres of acres suffered damage, reports the Bangladeshi disaster ministry. The country is largely dependent on agriculture.