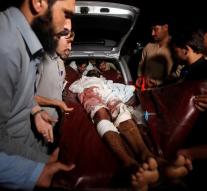 lahore - The death toll by a bloody double bomb attack on a market in Pakistan has risen to fifty. Sunni extremists say to be behind the terrorist violence. They wanted to kill Shiite Muslims by themselves.

The explosions in place of Parachinar caused 250 people injured on Friday, said a local hospital director. At the time of the attack it was busy on the market. Many people bought for the iftar, the first meal after sunset for Muslims who observe the Ramadan.

The Al-Alami group, part of the Lashkar-e-Jhangvi terrorist movement, stated on Saturday that the attack was intended to be revenge for the participation of Shiite Pakistan in the struggle in Syria. Hundreds of Pakistaners fight on the side of President Bashar al-Assad against Sunni rebels.