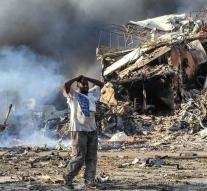 mogadishu - The death toll by two bombings on a busy crossing point in Mogadishu has risen to 85. This is one of the bloodiest attacks in Somalia since the 2007 Islamic militants of al-Shabaab drew out the holy war. According to a police spokesman, there are also hundreds of injured victims.

Police said that a jihadist in the center had a truck explosive explosion for a hotel at a crossing of major streets with government offices, restaurants and kiosks. The huge clap destroyed entire buildings and destroyed many vehicles in flames. Two hours later, a car bomb explosion elsewhere in the capital, in the Medina district, triggered a ravage.

The responsibility was not claimed on Sunday, but the authorities assume that al-Shabaab is behind.