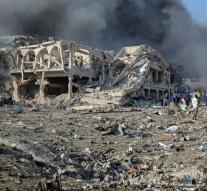 mogadishu - The death toll due to a bomb hit on a busy intersection in the Somali capital Mogadishu has risen to 276. That is what the Somali government reports Monday.

It is the deadliest attack since Islamist militants of al-Shabaab in 2007 called out the holy war. By government order, 111 dead have been buried because they can not be identified.

On Saturday, a suicide bomber in the center of the city brought a truck with explosives to a blast for a hotel, at a crossing of major streets with government offices, restaurants and kiosks. The huge clap destroyed entire buildings and destroyed many vehicles in flames. Two hours later, a car bomb explosion elsewhere in the capital, in the Medina district, triggered a ravage.