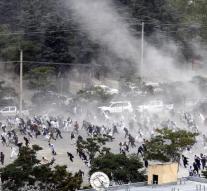 cabul - The death penalty due to the heavy bomb attack in the center of Afghan capital Kabul last week, according to President Ashraf Ghani, has risen to more than 150. The attack is therefore the deadliest since 2001 when the Taliban were chased.

Nobody has claimed the responsibility so far. Until Tuesday there were ninety deaths and about 460 injured.

The attack was Wednesday during the busy morning rush. A truck filled with explosives exploded at the entrance of a closed neighborhood with many embassies and government buildings.

According to Ghani, who spoke during a meeting with diplomats on Tuesday, all the dead are Afghans.