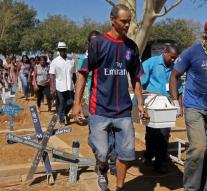 janauba - The number of deadly victims of the attack on a Brazilian crèche on Thursday has risen to nine. A man poured into the shelter of children and himself with alcohol and then found fire.

The victims are eight children and a supervisor. The 50-year-old perpetrator also suffered from the attack himself. There are still more children and adults injured in the hospital. At the time of the attack, there were 75 children and 17 adults in the building.