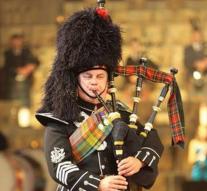 That letter doctors in the journal Thorax. Who does not have wind instrument clean and dry, risking a dangerous' bagpipe lung, 'they warn.

The doctors get a 61-year-old bagpipe player two years ago with severe shortness of breath and a dry cough was hospitalized. The Briton alveoli were chronically inflamed. His bagpipes, where a forest of fungi flourished luxuriantly, the culprit was found. But that discovery to no avail. The man eventually died of severe lung damage.


Allergic alveolitis, such as the cause of death was worded, was so far only been detected in bird watchers and people who are often on their work to come into contact with fungi. Doctors therefore have talked parrot disease, pigeon lung or lung cheesemakers. Now also appear bladder musicians at risk, write the researchers in Thorax.