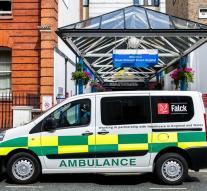 london - The hospital staff where the deadly British boy Charlie Gard is treated has received various death threats and injunctions over the past period. Director Mary MacLeod of the Great Ormond Street Hospital announces Saturday that incidents have even occurred in the hospital.

In a statement she says doctors and nurses have received thousands of offensive comments online and on the streets. The hospital switched to the police after other families visiting the hospital were bothered. In addition, she speaks of 'unacceptable behavior' within the walls of the hospital.

The parents of Charlie, who, by a rare genetic disorder, can not self-reliably and presumably suffer from pain, have been involved in a legal battle with the hospital. They want to go to the US for an experimental treatment with Charlie, but according to the doctors it does not make sense. MacLeod understands that the emotions around this case can be high, but finds that there are no apologies for what has happened.

Monday is the appeal and determines whether the court or new expert suspends justifies the earlier judgment that it is medically meaningless to keep the eleven month old alive. The doctors who have treated the baby so far do not believe Charlie can still be helped because he has already incurred irreparable brain damage.

According to an American doctor, up to 10 percent is likely to have an effect on the treatment. The parents collected more than one million euros to allow treatment in the US.