Home / World / DNA test: Woman not the daughter of Dali 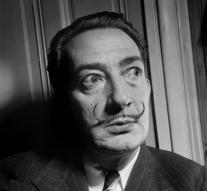 madrid - DNA tests of the excavated body of Salvador Dali show that Maria Pilar Abel is not the biological daughter of the Spanish surrealist artist.

The woman claimed that her mother had an affair with Dali and that she was born from that relationship.

The Dali Foundation reported Wednesday that the court has told its lawyers that the woman's DNA is compared to samples from the remains of Dali. This shows that the claim of the woman is incorrect. A spokesman for the court did not want to confirm the results of the DNA tests.