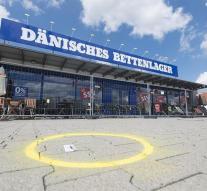 hannover - The raid two weeks ago on a German armored car is probably indeed the work of three fugitive former members of the Red Army Faction (RAF). At the crime scene found DNA from two of them, the police said. Or next to Ernst-Volker Staub (61) and Burkhard Garweg (47) also Daniela Klette (57) took part in the robbery is less clear, but likely.

The armored car in Cremlingen was seized on June 25. The three masked offenders, including a woman, servants, among others, an anti-tank weapon and an automatic rifle. The action was reminiscent of two robberies last year.

The police, the three former terrorists now responsible for nine robberies since 2011. The booty totaled approximately 400. 000. The trio, which has been hiding for decades, would be able to keep predatory are in their old age to their heads above water.