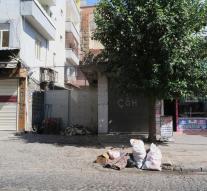 - The mayor of the Turkish Kurdish city of Diyarbakir has been arrested and is suspected of terrorist activities. Gültan Kisanak was arrested Tuesday night at the city's airport.

According to the state news agency Anadolu she have been accused of links with the outlawed Kurdistan Workers' Party PKK. Messages that co Mayor Firat Anli also been detained were not confirmed. His home was ransacked it.

Last month, were deposited together 24 mayors of places in southeastern Turkey because they support the PKK.