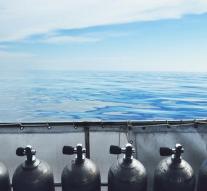 bangkok - During a trip to Thailand, five divers were killed because the ship they were sitting on was probably due to engine problems. Eleven others could be saved.

According to the police, the captain of the ship had declared that he knew there were problems with the engine but that he had gone to the Gulf of Thailand from Thursday on Thursday. The dead are four women and one man, all from Thailand.