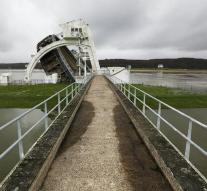 driel - A diver who worked at the locking complex in the Lower Rhine near Driel (Gelderland) disappeared underwater at noon on Friday. According to a spokeswoman, emergency services have been massacred to detect the diver. A trauma helicopter landed in a neighboring meadow.

Rijkswaterstaat is busy renovating the sluice complex, which is also called 'the tap of the Netherlands'. At Driel the river water is distributed over Lower Rhine, Lek and IJssel. The IJsselmeer also gets water from Driel.

Because the service has just started replacing sliding in the lock, it is also necessary to work underwater. In addition, the contact with the diver was lost, according to a spokeswoman of the service.